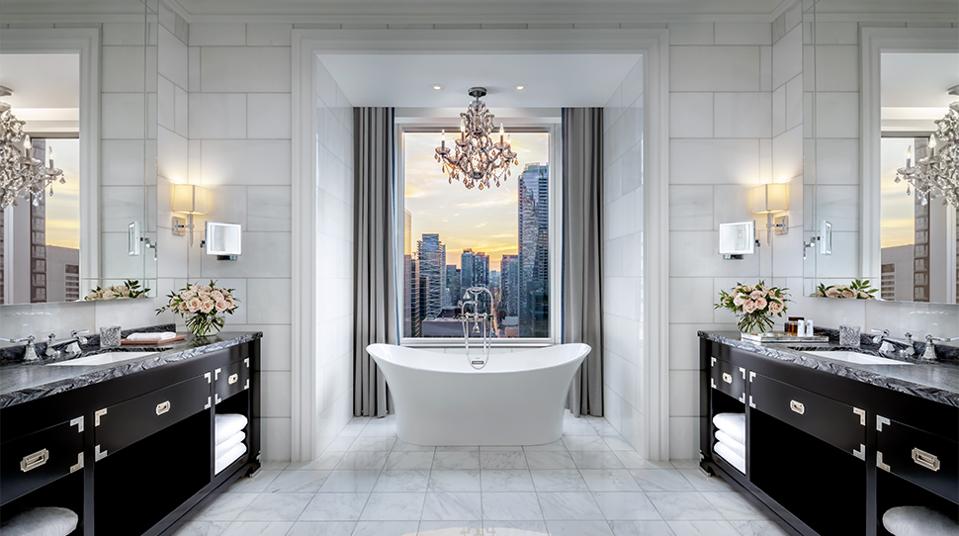 After the world shuttered in response to the pandemic, numerous hotels took advantage of the empty hallways and guest rooms to make substantial renovations. Many of these improvements are an attempt to cater to new travel habits in the age of COVID, when comfort is even more paramount and guests are sticking close to the property, staying for longer spurts of time and seeking out spaces for both work and play.

Here are some newly refreshed Forbes Travel Guide-approved hotels to visit when you are ready to travel:

Nestled on 200 acres next to a preserve, the San Diego hotel has always been a place to relish the great outdoors. Now, thanks to a $50 million makeover, it continues to focus on its surroundings with an airy lobby overlooking the ocean, an adult pool with luxe cabanas and a family pool with a waterslide and tide pool splash pad. Even the refreshed rooms take their cue from nature: the color palette comes from the local great blue heron.

At this beachfront paradise, the revamped rooms have shades that pay homage to the blue-footed booby birds endemic to the Marietas Islands just off the coast. Area artisans created the décor, including decorative volcanic stone and clay pieces, teak and huanacaxtle wood furniture, traditional textiles and Huichol art consisting of tiny colorful beads wedged into wax representing the peninsula. A new minibar features products tied to Punta Mita and a locally made copper backsplash. And watch out for the new Beach Houses; they arrive December 19.

The Munich hotel marks its 20th anniversary this year by emerging from the most extensive renovation in its history. It unveiled new guest rooms and suites that elegantly mix different styles (like historic heritage furniture with a contemporary color scheme) and feature images of the Alps by local artist Felix Rehfeld (a tribute to Munich being the gateway to the peaks). Expect special in-room perks, like butlers, locally produced biodegradable coffee capsules for Nespresso machines, a bar with daily creations by Matsuhisa Munich and a daily champagne experience from a roving trolley.

To offer more private accommodations, the intimate D.C. property launched six new townhouses. The structures were built in the 1700s, but received an update by local designer Thomas Pheasant. Adjacent to the Georgetown hotel, each four-story townhouse has its own entrance and furnished back courtyard, laundry room, kitchen (with Smeg Williams Sonoma, KitchenAid and Nespresso appliances), bedroom, living room with a fireplace and bathroom with a deep-soaking tub, rainforest shower and heated marble floors. You’ll have access to all the hotel amenities, but the butler is all yours.

Although the St. Thomas hotel wrapped up its $100 million redesign at the end of 2019, it only began showing off its beach-chic public spaces, rooms and restaurants when it reopened in September. In addition, the tropical escape devised a slew of COVID-era offerings, including a three-bedroom penthouse for travel pods and digital workers, a Seaside Spa Cabana for those who prefer alfresco massages and the clever Club Lounge on the Beach, where Club Level guests have their own area on the sand with a complimentary non-alcoholic drink service.

It’s hard to believe that this Washington, Connecticut, country inn turned 100 after New York-based designer Celerie Kemble gave it a facelift in time for its centennial. In the rooms, Kemble gleaned inspiration from English and Scandinavian country houses. She kept the four-poster beds, but brought in florals, intricate patterns and color, sisal carpets, Turkish rugs, handcrafted ceramics, eclectic wicker, Gustavian antiques and contemporary art. She also turned her eye to a new farm-driven restaurant, The Garden Room, adding a large-scale floral mural and lots of greenery.

Jump right into the new Plunge Pool Oceanfront Suites, where you can soak in your own serene pool while gazing at the Sea of Cortez. But pry yourself away to partake in the Los Cabos hotel’s other new attractions, like the adults-only infinity pool and Enclave, a beach club with a rum bar, four cliffside bungalows, eight oceanfront cabanas and sunken fire pits. Little ones will stay busy at the reimagined kids club’s outdoor playground and splash zone with a pool and water slide.

For the largest renovation in its 30-year history, the downtown hotel attempted to capture the essence of the cultured city. It spotlights music from local jazz, blues and house artists throughout. Chicago-based consultant Shashi Caudill curates a vast art collection. A day bar and social lounge encourage lingering, and respected chef Jonathon Sawyer crafts global fare with local ingredients at the new Adorn Bar & Restaurant. And like the Magnificent Mile just outside the hotel’s doors, the revamped rooms take on a stylish and luxurious aesthetic.

This art deco gem gets polished to its original luster in Miami. The $90 million renovation kept architect’s Morris Lapidus original design intact (like the two-story ship-inspired lobby), but added modern touches (like the inviting bronze-and-brass Lapidus Bar). Yet it also flaunts the classic Florida style, from the subdued flamingo-wallpapered hallways to the pops of pink in the graphic flooring in the indoor-outdoor restaurant Fuego Y Mar. The guest rooms feel bright and renewed with white art deco moldings and curved navy headboards, and the white marble bathrooms exude that Ritz-Carlton luxury.

Steps from the San Francisco Museum of Modern Art, the Contemporary Jewish Museum and the Yerba Buena Center for the Arts, this hotel had to keep up with its neighbors for its renovation. It tapped into San Francisco’s history and natural beauty for the upgraded rooms. The city’s hills are worked into a wall covering with the soft curves of a Richard Serra-inspired sculpture. Photographer Ansel Adams’ California shots sit underneath smoked desk glass. And the silver, copper and iron hues recall the California Gold Rush of 1849.

The Boston hotel recently embarked on a renovation of the city’s most spacious luxury accommodations. New York City-based Champalimaud Design, which did the interiors for Raffles Singapore and Halekulani Okinawa, blends elements from the Mandarin Oriental’s Asian roots and New England location into an eclectic but cohesive design. Neutral hues pull together the chinoiserie wallpaper and plaid carpets. For longer stays or more in-room dining options, book a suite equipped with a brand-new kitchenette, which has a stovetop, sink, microwave and refrigerator.

The Telluride hotel is set to embrace the mountain town’s relaxed luxury with a comprehensive refresh of its first-floor public and social spaces, which will be unveiled December 23. After skiing, cozy up to seating areas with vintage and custom furniture crafted with an attention to detail. Or après-ski in the new Timber Room, a lounge serving up fresh bites and cocktails. Order bota bags filled with mulled wine to share — it’s the Telluride version of the punch bowl. More will come, as the guest rooms are scheduled for refurbishment in 2021.

Known for its tennis and golf offerings, The Spa at Ponte Vedra Inn & Club and its unspoiled beach on the Atlantic coast, this Old Florida getaway adds another accomplishment to the list: 41 new beachfront rooms and suites. In September, it introduced Ocean House and Peyton House, three-story buildings that hold the accommodations. Each room has sweeping ocean vistas, terraces and Southern coastal flair.

Plus, the storied Ocean Course — one of the state’s oldest — reopened after a year of renovations by golf course architect Bobby Weed.